I began making sculpture as therapy for chronic pain. During my studies at the University of Colorado and at the Chicago Art Institute, therapy became a full fledged artistic practice. Traumatized from living under military dictatorships in Paraguay and Chile, I suffered form chronic headaches and severe PTSD symptoms for seven years. I was saved from this existential hell by acupuncture. My artistic practice has focused and explored existential suffering, totalitarianism, political correctness, public art, cowboy art, to making sculptures with flame effects for Burning Man

As a high school exchange student from Colorado, I lived under the military dictatorship of Stroessner in Paraguay and Pinochet in Chile. My first hand experiences of military dictatorship transformed me from someone who wanted to enlist into the military into an anti-war activist. I was severely traumatized by experiences in Paraguay. This left me with a chronic headache for seven years. The low point was feeling numb from the neck down with debilitating chronic headaches, chronic anxiety and chronic longings for death to release me. The blood vessels to my brain were dilated filling my head with excessive blood. Smaller to larger nerves in my body were shutting down and turning off. I was told after week of hospitalization that my condition could not be controlled with medication and that my condition was terminal. I was told I only had a few yers left to live. Finally, I found relief and healing from acupuncture. I was resigned to terminal illness, then out of the blue, I was saved. Acupuncture reversed the process and my nerves began turning back on and the headaches finally began to let up then finally stopped all together.

After years of unsuccessful medical treatment, I began making sculpture as therapy to deal with my chronic pain and anxiety that doctors could not treat. I understand the condition now as severe Post Traumatic Stress Disorder. I have never been officially diagnosed with PTSD, my condition was regarded as much more severe and was never given a name. Doctors called it ‘a progressively degenerative neurological disorder.’ My art works from 1985 to 1992 were made in the spirit of therapeutic discovery that developed into a full fledged artistic practice.

For my Bachelor of Fine Arts exhibition in Sculpture, at the University of Colorado in Boulder, I lampooned the far right with a satirical work. “A Burning Dilemma Video Sculpture,” 1992 is a multimedia robot built out of an ancient washing machine, a cast aluminum Buddha like torso with a tv built into its chest. The video uses bombastic political imagery as anti-right wing propaganda to make a point against brain washing and the manufacturing of consent.

At the Art Institute of Chicago, I pursued my Master of Fine Arts degree in Sculpture. Originally, I intended to further explore the issues of military dictatorship but I changed my path. During the height of academic political correctness and my response to it was to make the “La Mano Poderosa Series” 1990-1991 sculptural satire lampooning the dictatorship of false liberal virtue then reigning in academia. In my MFA exhibition piece I satirically demanded that I be expelled based on the politically correct agenda. Instead, the piece was show cased at my graduation and I was honored.

“Thermodynamic Conservation,” 1997 was made in Chicago & Mexico City in collaboration with Carmen Mariscal. In this multimedia installation we explored the out of body experiences we had both experienced as result of terrible physical pain forcing our spirits to briefly leave and then return to our bodies. The piece, wildly popular with the Mexican public, won the “National Prize for Installation Art in Mexico” 1997. It was featured on MTV in Mexico. 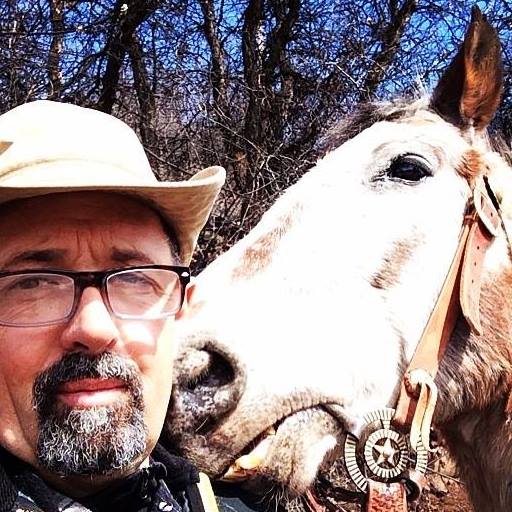 “The Rodeo Series,” 1999-2000 evolved from teaching myself to ride saddle broncs in using slow motion video. This series was my effort to re-invent moribund Western art with computer video technology. With my video projections of slow motion video on rawhide screens I sought to evoke ancient cave painting with modern technology. And with my video still images on canvas I sought to break some molds. These works were shown at the Aspen Art Museum, the University of Wyoming Art Museum, The Museum of the American Cowboy, and in many exhibitions including the Coors Western Art show in Aspen, Austin, Colorado Springs, Denver, Laramie and New York City.

“The Indian Wars of Palestine,” 2003 was a result of my response to the shocking attack on NYC on 9-11-2001.  Wanting to understand Muslim rage against the West, I investigated what was going on in Israel. I made a personal pilgrimage to Israel/Palestine. The more I’ve investigated, read, witnessed a parallel emerged, i.e. the parallel histories of Native American Indians and Palestinian people. I saw similar native peoples driven off their ancestral land by settlers who justified ethnic cleansing with the name of their religion. In my collaborative exhibition full rawhide skins have been impregnated with video and photographic images of atrocities. The historical allusion is to the buffalo hide painting of the Plains Indians that artistically documented their battles.

Public Art at the Burning Man Festival in the Black Rock Desert of Nevada became my next focus. I worked on Nick DeWolf’s “Ma’am: The Mammoth,” 2003-2009. It’s a life sized, human powered, mammoth skeleton vehicle. “Zarafa: The Burning Giraffe,” 2009 was shown at that year at Burning Man. It’s a large steel sculpture I repurposed with custom made flame effects. My most recent mutant vehicle is “The Triceratank,” 2010-2012. Exhibited at Burning Man three times, it is a sculptural Triceratops dinosaur built out of steel and rawhide concealing an old jeep. It has three custom made flame effects in each of its three horns. The flame effects have hand forged steel whistles built into them that scream and shriek when the pressurized propane is released for flame throwing. The howling flames can shoot 15-20 feet in the air.

Since 2014, I’ve focused on making beautiful things out of wood on my remote property on the edge of the Snowy Range Mountains west of Laramie, Wyoming. There I cut down beetle killed ponderosa pines. Then on my portable sawmill I cut them into planks. On site, in my workshop, I have them made into tables, paneling and counter tops. These items have been used in my historic building renovations in Wyoming, Colorado and New York. I designed and built a 2500 square foot post and beam barn out of my trees. The barn serves as the studio workshop for my company Rafter Six Woodworks.

What in the works? I am currently planning and developing plans for public art projects. One addresses Climate Change and the other Gun Violence. Stay tuned.

1988 “Whoops Outside Your Head,” Group Show, University of Colorado, Boulder

Portrait of the Artist as a Cowboy, (Saddle Bronc Rider #10), 1999, digital video still on canvas from “The Rodeo Series 1999.” Donald and Karen Ringsby, Aspen, Colorado.

Westword, “Fast and Loose,” by Michael Paglia, Thorough review of the Colorado Biennial at the Museum of Contemporary Art/Denver and “Bull Rider,” 2000 video installation by Eric Ringsby, Denver, Colorado, Nov, 2, 2000.

Friendly Dictators (forthcoming). Ringsby’s novel about personal and societal moral responsibility and of an American’s coming-of-age under military dictatorship in Paraguay and Chile.

Rafter Six Ranch Summer Photo Workshop: Eric Ringsby is director. Rafter Six Photo Workshop is nestled at the base of the Snowy Range Mountains of Wyoming’s Medicine Bow National Forest, near Laramie. The mission of the Rafter Six is to provide a non-ideological environment for the exchange of ideas and to provide access to the traditional Western lifestyle.

ericringsby.com: Ringsby’s extensive websitewith large color images featuring four distinct portfolios of his contemporary art, Friendly Dictators novel (forthcoming), The Rafter Six Ranch & The WWII Photography of Raymond Getz. Ringsby is preparing his collection of WWII Photography of U.S. Major Raymond J. Getz M.D. for international exhibition. Getz was a medic at the front and organized the treatment of prisoners released from concentration camps. These images of Europe before, during and after WWII to the Holocaust, also features unreleased photos taken by The Third U.S. Army and by a German officer.

1997 Part-time Faculty, “4-D: An Introduction to Film, Video, Installation and Performance Art,” The School of the Art Institute of Chicago, Chicago Illinois.

1995 Art,” The School of the Art Institute of Chicago, Chicago, Illinois.