The Indian Wars of Palestine 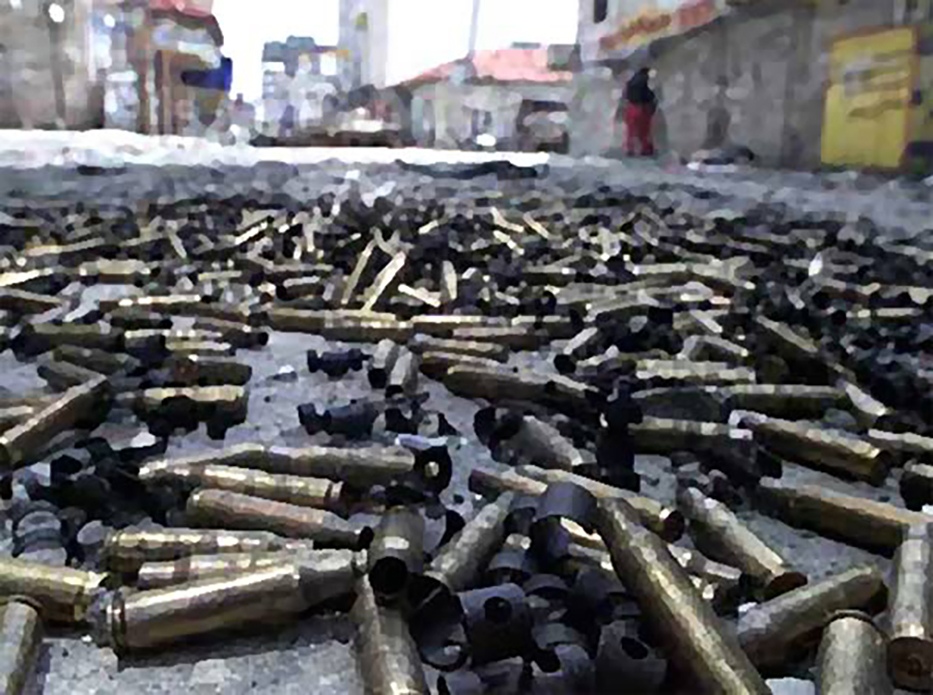 David Floria Gallery is pleased to announce their first solo show of Eric Ringsby’s multi-media art. Ringsby is known for the “Rodeo Series” with its dramatic video projections of slow-motion rodeo action on double rawhide projection screens and for his innovative use of evocative primitive materials. This time his skills have been put to a decidedly political end. The opening reception is Friday, March 19th from 6 – 8 PM. In the year 2000 RINGSBY made a personal pilgrimage to Israel. At the Wailing Wall he read the Old Testament and prayed for three days. The political realties he witnessed appalled him. Not being Jewish or Muslim, and as an independent minded 5th generation Coloradoan who lives and works on a Wyoming ranch, Ringsby has delved into the political crisis in Israel with the freedom of a complete outsider. The more he investigated, read, attended lectures, and met with peace activists, the more a parallel emerged, i.e. the parallel histories of Native American Indians and Palestinian people. Ringsby sees two native peoples driven off their ancestral land by settlers who justified their quest in the name of God and by their blood spilled by the natives. His unique perspective allows Ringsby to identify with the Indian and the pioneer, Palestinian and settler. Through his art Ringsby works to promote peace and reconciliation and to end the bloody occupation of the Palestinian territories with “The Indian Wars of Palestine”. Ringsby will donate his profits to Rebuilding Homes, an Israeli-Palestinian peace coalition that protests and resists the occupation. This series was created as in collaboration with peace activists in Palestine who donated photos and video material.

For the exhibition, full rawhide skins have been impregnated with video and photographic images of atrocities committed in the Occupied Territories and Israel. The historical allusion is to the buffalo hide painting of the Plains Indians that artistically documented their battles. Neither people had a voice in the media; both watched helplessly as their cultures were leveled. The world was not moved by the plight of the Indian nor of the Palestinians until it was too late, or so the artist laments. Also included in the exhibition are video projections and digital video stills of appropriated imagery documenting the political crisis and abuse of human rights in Palestine.

ERIC RINGSBY attended high school in Paraguay and Chile under two brutal fascist regimes funded by the US. This forever raised his consciousness of the importance of civil rights, of speaking out, and of the dark side of American foreign affairs. He received his MFA from the Art Institute of Chicago and his BFA, BA and EMT from the University of Colorado. He has worked in the peace movement for years, against nuclear proliferation, for Rocky Mountain Planned Parenthood, against racism with the Jackson ’88 campaign, against apartheid in South Africa and against academic political correctness at the Art Institute of Chicago. Ringsby taught at the Chicago Art Institute, University of Wyoming and won the Mexican National Prize for Installation Art in 1997.