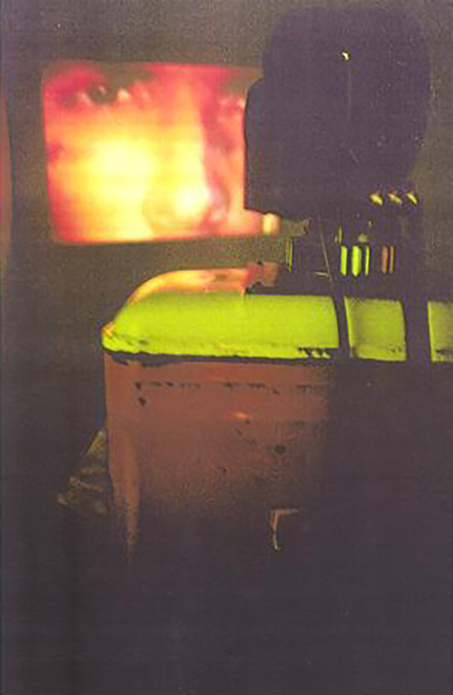 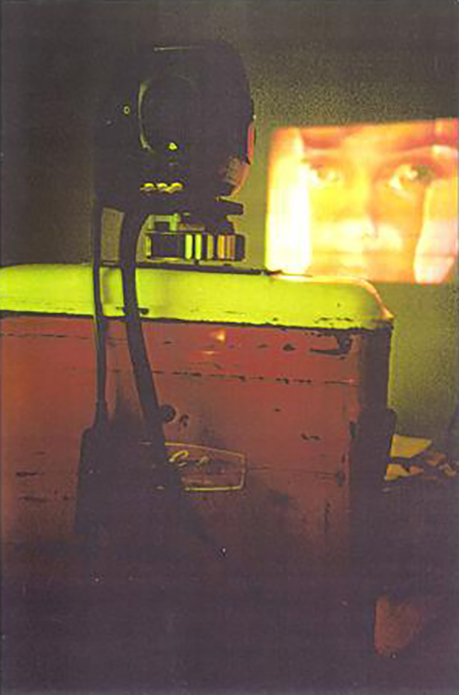 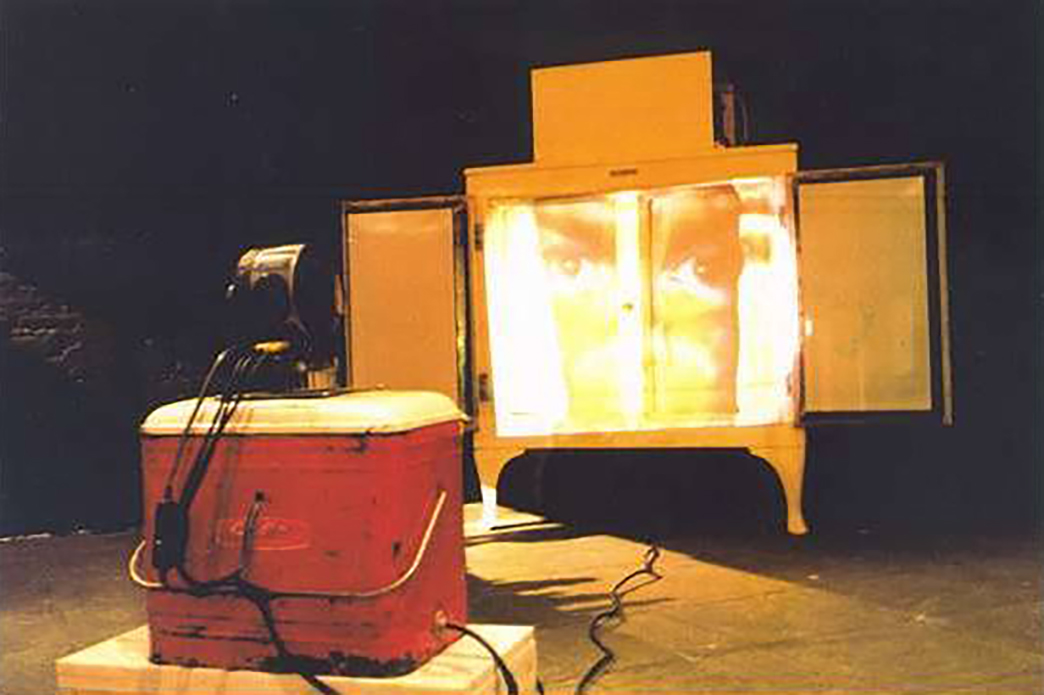 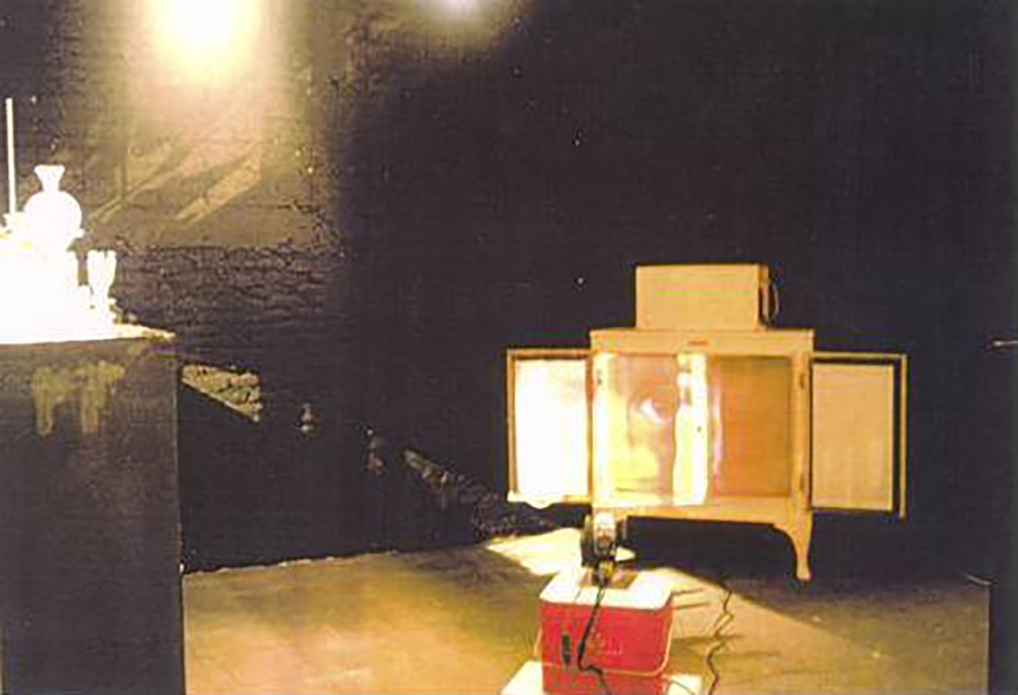 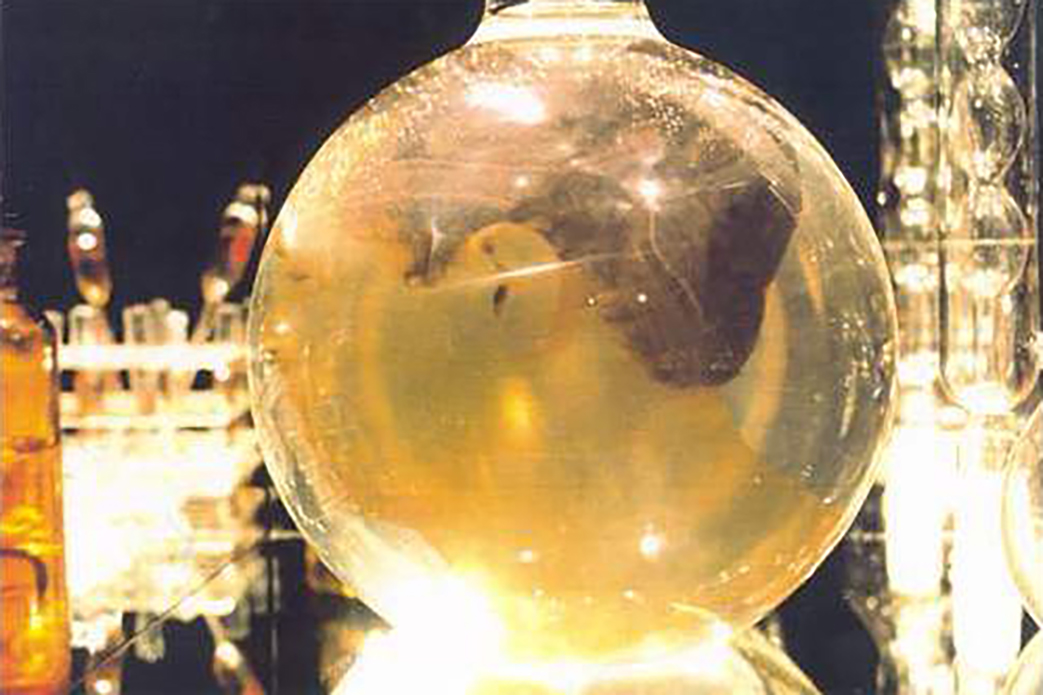 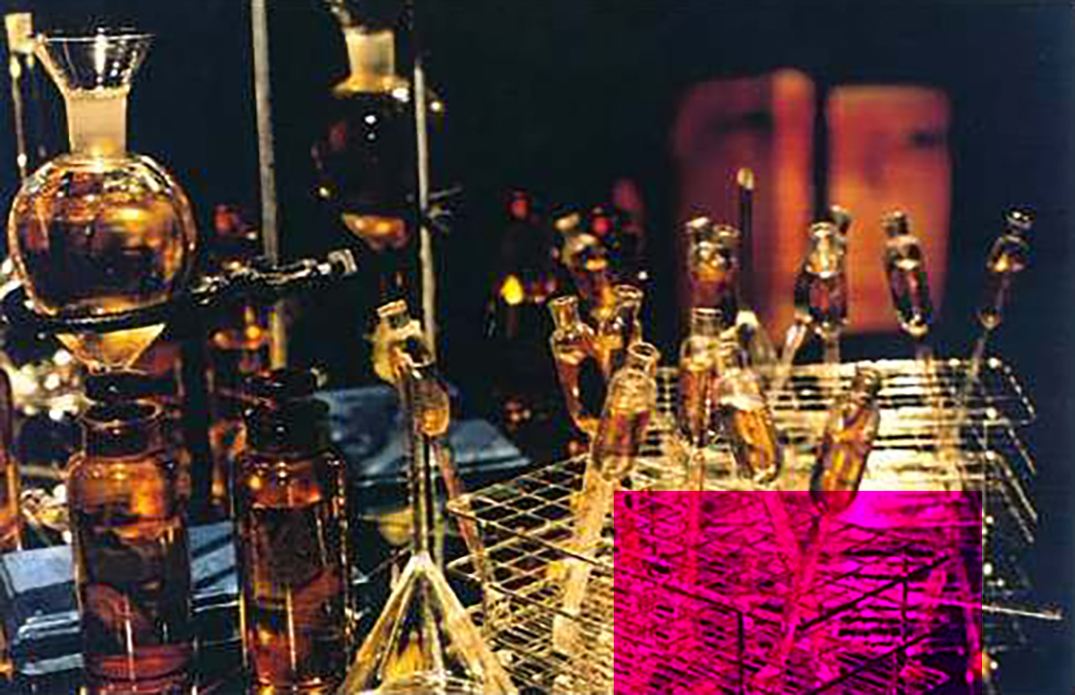 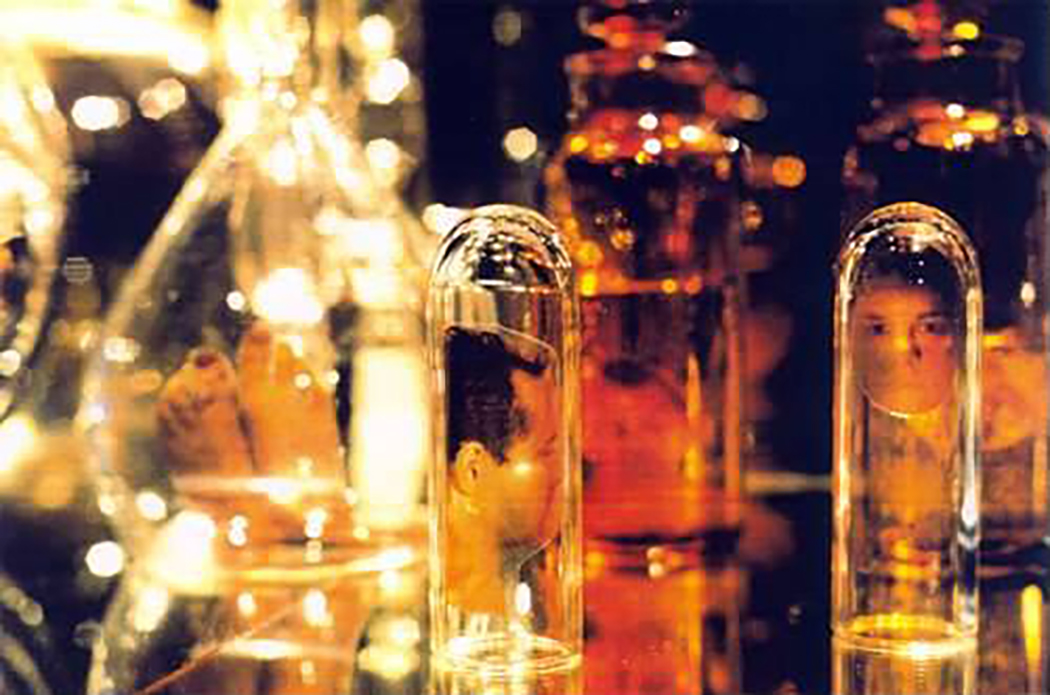 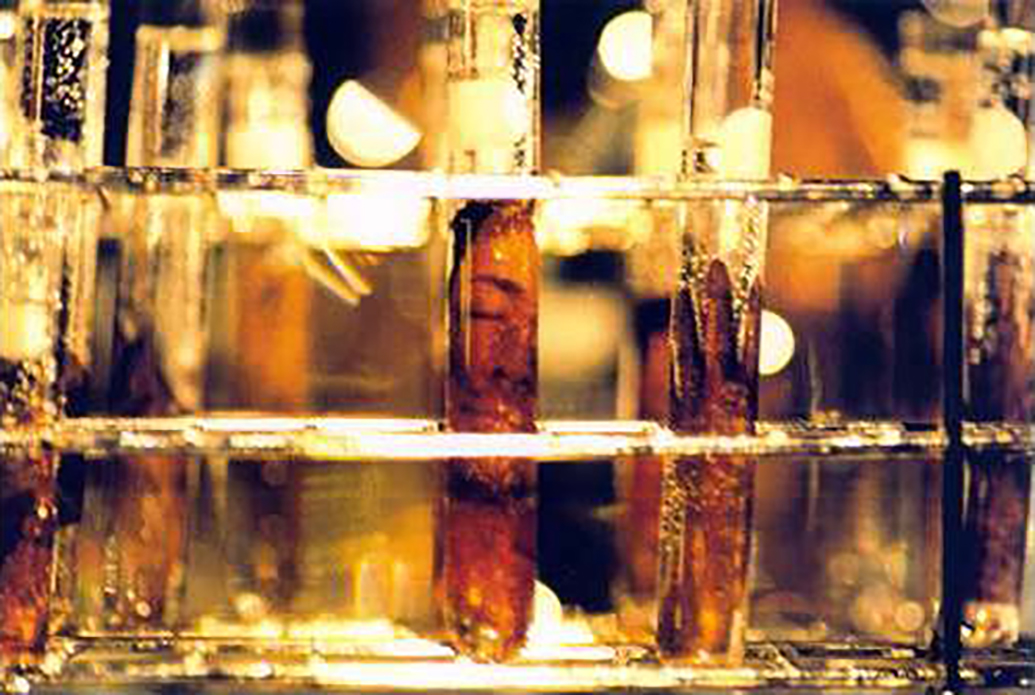 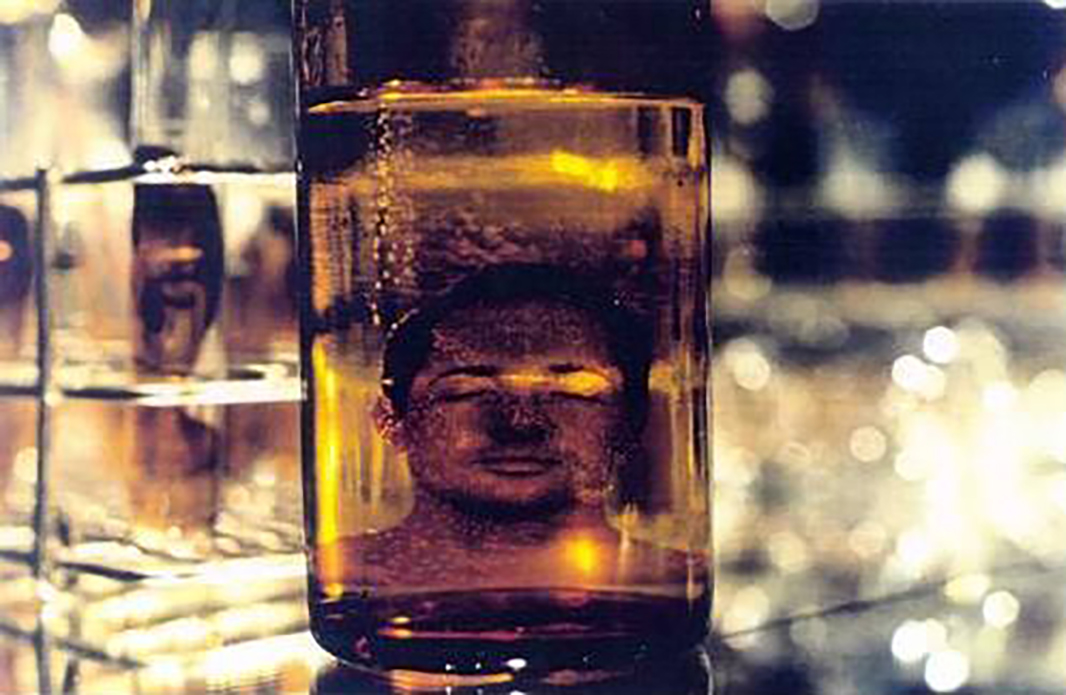 The following images were taken of Thermodynamic Conservation, 1997 at the Mexican National Exhibition of Installation Art.

Central to the work is the 1920’s Frigid-Aire refrigerator. It was displayed with doors open and humming with electricity. In front of it, based on a cold marble pedestal was the video projector, itself built into a vintage metal ice chest. The projector pivoted to the left and right at timed intervals. Onto to the cold machine, which appeared as a fat human figure with arms wide open, appeared sensual and warm images of a man and of a woman.

Complementing the video projection, two mirrored shelves were covered in scientific glassware. Like religious altars, and in reference to the deification of science, the shelves were built into the walls on either side of the fridge. Emerged in purified water inside pipettes, test tubes, beakers and titration valves are the transparent sepia tone images of a man and a woman, the artists.

The pieces were dissected and cut into little parts by science and technology as if DNA samples. Science can identity one by DNA, blood type, finger print, etc. but it can not identify human desire or human eroticism. And where is the human soul; where is God? just as matter can not be destroyed, only rearranged (the Law of Thermodynamic Conservation of Matter) personality can not be destroyed only rearranged and the same is true for the human soul.

One can change ones identity continuously, have it trapped and sealed off from the world, have one’s identity dissected on the level of proteins (DNA analysis) and yet ones essential make up remains. And this installation is something of a laboratory for the investigation of who were are in spite of the scientific evidence. 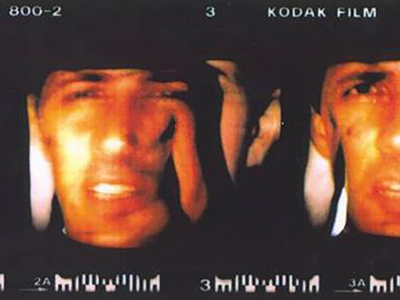 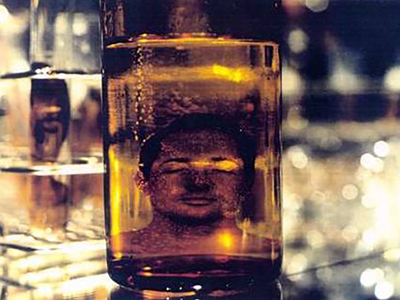