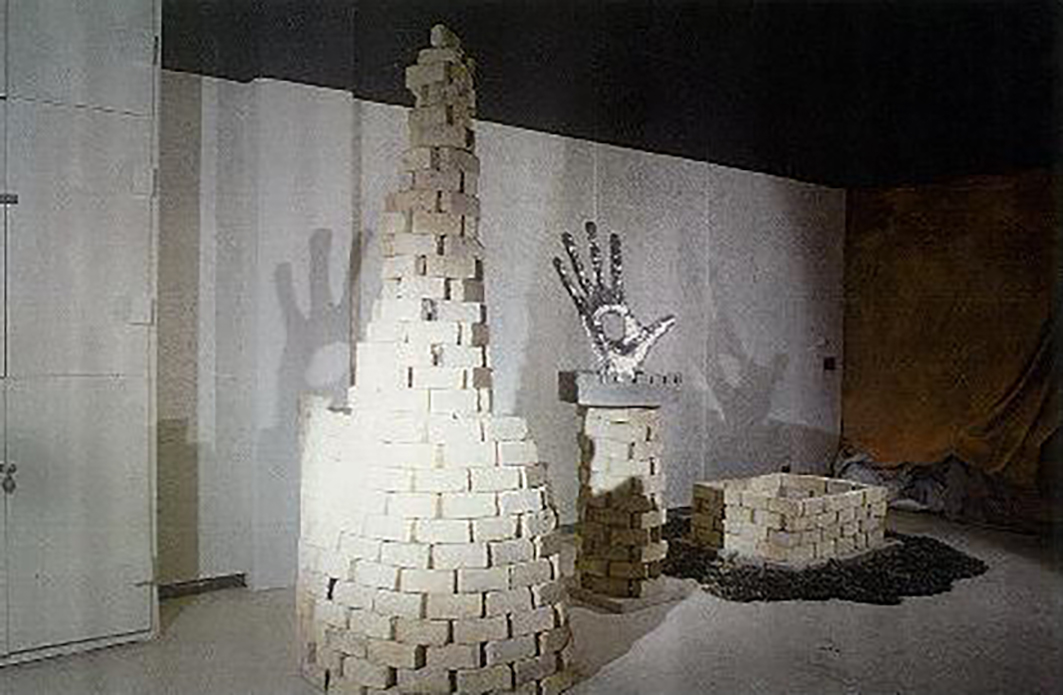 In this image Ringsby has initiated the Mano Poderosa installation. La Mano Poderosa (the powerful hand of God) is a Mexican folk image of the open and extended hand of Christ with stigmata and five saint figures, one on top of each finger. In this first installation neither the TV nor the Santo angels were included. As the television had not yet been installed the gaping stigmata or wound from the crucifixion nail is clearly visible. One also notes the texturing on the cast aluminum hand. The tactile quality was created with Ringsby’s fingers in the wax model used for the hand. And as the artist used his own hand as the template for the final image one is led to think he is referring to his own victimization and is identifying his the suffering of Christ. At the same time the form of the hand coming out of the tower looks something like an extended arm reaching for the heavens. Five tons of one hundred-year-old recycled Chicago brick were used in this architectural installation. The brick reflects directly upon Ringsby’s living environment, Chicago has to a very great extent been rebuilt of brick since the great fire of the 19th Century and its architecture is very imposing with its towering skyscrapers. Ringsby has not 9 , recreated Chicago, although he refers to it. This installation refers to ancient religious architecture with both its direct focus on the worship of God and the horrendous abuse of human rights. The Tower of Babel stands to the left. With it the artist refers to the ivory tower of academia as something sordid. To the right lies The Gulag or concentration camp of political prisoners.