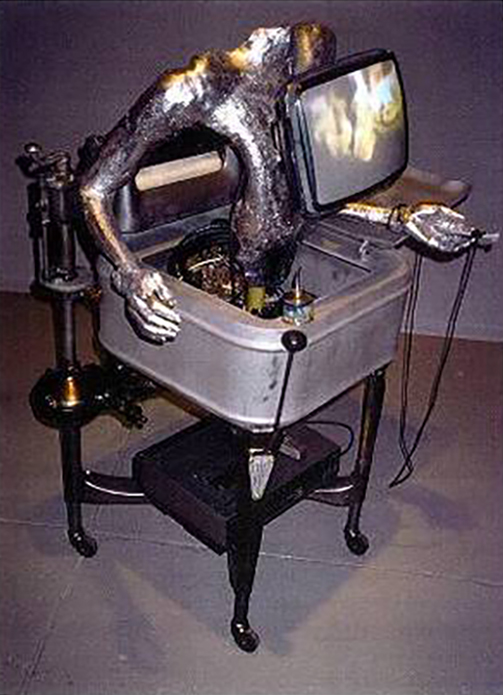 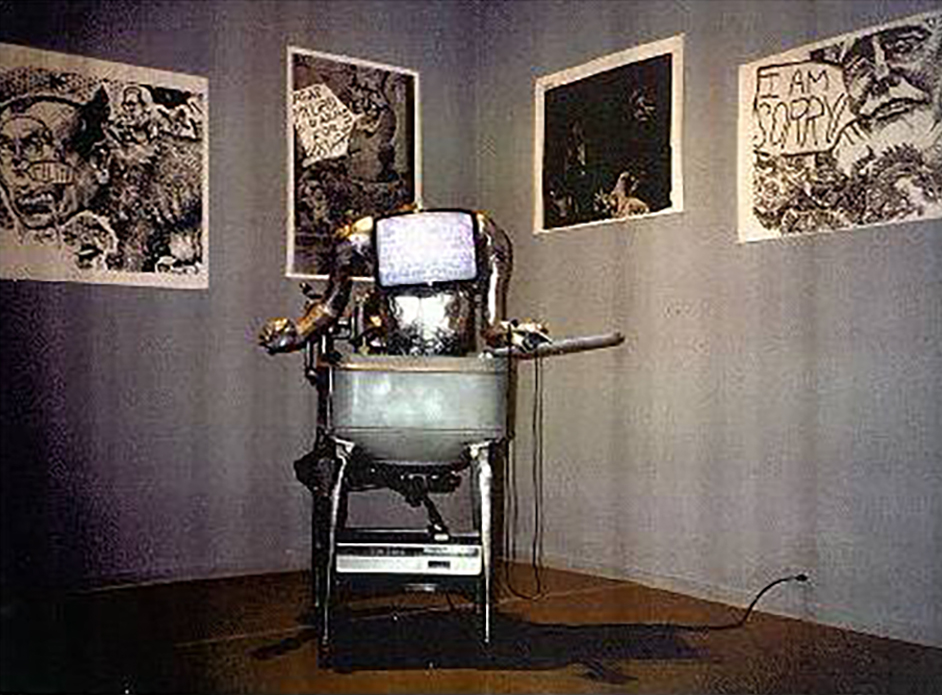 This multimedia video sculpture centers upon an American media robot. A washing machine housed the media hobbled humanoid, like a wheel chair. The relic, an industrial feeling 1938 Maytag, is used in reference to brain washing. From its interior, like a jack-in-the-box, emerges a headless human torso. The figure is cast and polished aluminum. The casting, based on traditional Buddhist sculpture, is of a male chest with outstretched arms and hands beckoning viewers to come and contemplate. Protruding from the center of its chest, from a cut out of America, is the exposed screen of a 13″ color TV. The picture tube protruding from the chest, with elongated cables, wires, electronics and video image, transforms the figure into a media robot. The video, with its bombastic use of its text, political iconography and sound effects, uses propaganda to ask the viewer to momentarily contemplate, reflect and re-think the “media manufacturing of consent.” Burning Dilemma, 1992 uses propaganda against media manipulation with the goal of tempting to make the viewer consider the implications of propaganda upon unwitting consent of media manipulation. In addition to the robot, the “Burning Dilemma Users Manual” helps make sense of the political satire and of Ringsby’s symbolic obliteration of insidious media images. In its first exhibition the robot was displayed surrounded by four poster size computer generated political cartoons. These images, “The Four Horseman of the Apocalypse of American Civil Liberties,” are ritualistically destroyed with shot guns, homemade napalm, burning oil, silly string etc. in the video. On the bench in front of the assemblage were copies of the Colorado Daily, Boulder newspaper open to the anti-media advertisements that used each of the political cartoons with the caption, and the mantra of the work, “Resist the Media Mold of Manufactured Consent!” The Burning Dilemma is for the necessity of challenging media propaganda or of becoming its victim thus puppet.